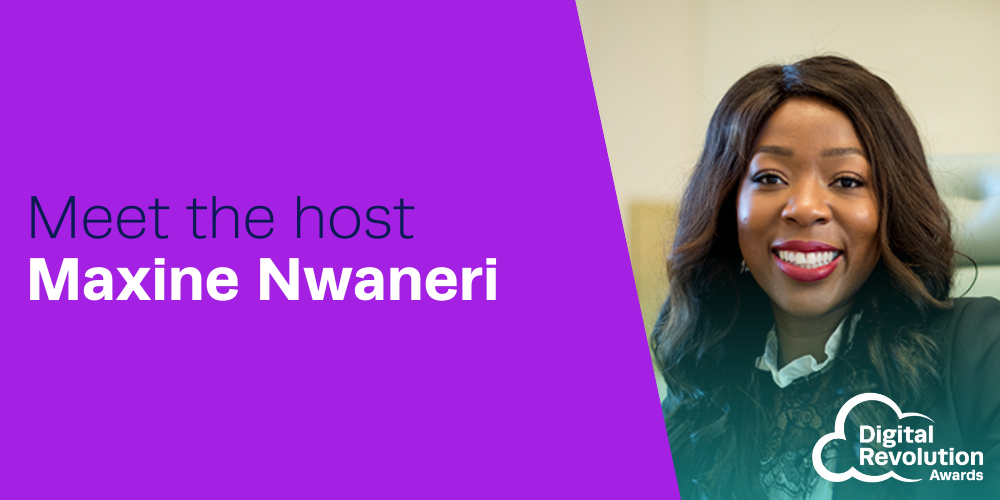 We caught up with our fantastic host, founder, CEO and entrepreneur Maxine Nwaneri to find out about her experiences hosting the first-ever Digital Revolution Awards under challenging circumstances, and what she’s most looking forward to about doing it all again in 2022.

Maxine Nwaneri is the Founder and CEO of The Future is Greater, a professional services firm that helps companies retain, develop, and advance top diverse talent to drive business results.

Her company has helped clients on five continents achieve extraordinary results through executive coaching, consulting, workshops and other solutions based on proprietary processes developed from over two decades of dedication to radical development and transformation.

Prior to setting up her practice, Maxine obtained her MBA from Cambridge University, and acquired over 15 years’ experience in the technology and financial services industries. Her work has been featured on TV and several stages and publications internationally including HuffPost, Success Magazine, and Thrive Global.

What was your experience like hosting the Digital Revolution Awards last year?

It was spectacular! I found the experience to be inspiring, energising, and actually quite therapeutic.  Like so many others around the world, that was an incredibly difficult time for me on a personal level due to the pandemic, losing loved ones, and coping with unprecedented challenges on so many levels. Having such a positive and uplifting event like the Digital Revolution Awards to work on, in collaboration with so many amazing people around the world was truly wonderful!

What are you most looking forward to about the upcoming awards?

It’s so hard to pick just one thing as there are so many aspects of it I am looking forward to.

If I had to pick one, it would be the positive impact I hope it will have on everyone involved. I hope that by being recognised, appreciated and celebrated, all nominees will be inspired and encouraged to do even more ground-breaking and innovative work in the cloud ecosystem.

I hope all those watching will be inspired by what they see to reach for new heights in their own lives and careers. I also hope the awards have a tremendous impact on St Martin’s School and the students who we’re raising funds for, and that quite frankly all involved in any way, including the organisers, judges and sponsors will be positively impacted.

What category are you most looking forward to presenting and why?

Again, it’s super tough to pick one, as I think they’re all amazing and relevant categories. That said, I think I’m most looking forward to presenting the Tech for Good award.

Even as the world is opening back up, many things remain uncertain and unpredictable, which often makes decision-making and problem-solving all the more complex. I’m therefore incredibly inspired by individuals and organisations who leverage technology to do this, and make the world a better place, like last year’s phenomenal winners Polaris, as well as those that made the shortlist, TechMums and Chaitra, for Women in Cloud.

I’m really looking forward to seeing who gets nominated in this category this time.

You're at an awards ceremony; what food are you making a beeline to the buffet table for?

"Definitely seafood, especially huge prawns! I could eat them all day, every day!" 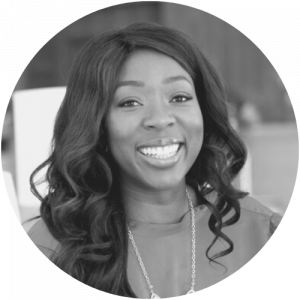 How has cloud technology made an impact on your life, or within your business?

I love the freedom and flexibility cloud technology enables me to have in business.  At The Future is Greater, we have clients on five continents, so cloud technology is crucial in enabling us to connect with, and serve them at the high levels we are known and loved for. It also enables us to scale relatively quickly and easily as needed.

As a judge, what kind of thing catches your eye about a nomination?

The impact being made always gets my attention, whether that’s an impact on clients, employees, others, the business, or the world. I find nominations that clearly demonstrate positive impact most interesting.

What tips do you have for anyone for submitting a strong nomination?

I would say be authentic, let your personality, as well as the passion and purpose of the nominee, shine through. Do what you can to demonstrate impact, using numbers where it makes sense, and sharing context if needed.

"I have had so many women reach out to me afterwards to say how inspired they were to take their own careers to the next level after watching last year's awards, and I’m hopeful for more of the same following the 2022 awards."

So much of your work is about empowering ambitious professional women; how important do you think awards are in achieving this goal?

It’s incredibly important; I think that there are few things that empower women to reach for their highest potential like seeing others’ success being recognised and celebrated as the awards will.

I’ll share a quick story to show how profound this can be: I was recently invited to advise the general manager of an international company on what he could do to empower women in his organisation, so they would apply for high-impact roles to advance in their careers. He was keen to close the massive gender leadership and pay gaps they’d had for a very long time, but there were very few applications from women to the roles he wanted to fill.

This is a complicated problem, with many potential underlying causes, and many firms all over the world are grappling with this. However, as I looked through their specific organisation, one thing stood out so clearly as a massive contributor to their problem; almost everyone that was seen and celebrated was male. While these men’s achievements were certainly worthy, and rightly celebrated, it was easy for me to see why the company was struggling to empower women.

The message being unintentionally given was that to succeed, you need to be a white, middle-aged man. I know from my work that seeing relatable role models celebrated is incredibly empowering for women, so I worked with the leadership team to create a video communication series that would do exactly that by spotlighting and celebrating the successes of women who were doing great things within their company.

It was a tremendous success; within a few short months, they were inundated with amazing applications from women to take part in training and development programs aimed at helping them step into high-impact and high-visibility leadership roles.

I believe that the Digital Revolution Awards can, and will, have this sort of impact on a larger scale.  Last year we had great diversity amongst the nominations, as well as the panel of judges. The latter made for a thorough and fair judging process which was conducive to an empowering showcasing of achievements in the diverse shortlists, and winners.

I have had so many women reach out to me afterwards to say how inspired they were to take their own careers to the next level after watching last year’s awards, and I’m hopeful for more of the same following the 2022 awards.

If you were to win an award yourself, what would it be most likely to be?

It would probably be “Optimist of the Year!” One of the things that has served me really well over the years is my God-given ability to maintain hope and confidence about the future no matter what I face.

When life gives me lemons, I figure out how to make lemonade, and then profit from it; and love helping my clients do the same.